The Amazons, I’d heard a few of their songs on the radio and always found myself turning the volume up especially during the that electrifying guitar riff in ‘Black magic’. So, when I won tickets to their MTV Live gig I was intrigued to find out what all the fuss was about.

First things first, let’s talk about the stage. I’ve never seen anything like it, there’s a normal stage but it’s inside what can only be described as what looks like a huge metal children’s climbing frame. The audience where scattered around the platform with no room to swing a cat, no more than fifty people could fit.

MTV Presenter Becca Dudley starts the shows by introducing the Reading foursome and the band don’t waste any time, they’re straight into a song from their number one album ‘The Amazons’. The audience seems to be pretty young a fusion of die-hard fans and people who like myself, are pretty new to the group of rockers.

Watching their performance, it is crystal clear that the members of the band have a great relationship. Their interaction with one another really showcases this. At times, it was almost as if they’d forgotten they were onstage in front of an audience. Front man Matt Thomson soon engages the young mob of fans hurling his wonderful pumpkin orange hair around.

Mid way through the gig, microphones are passed around and questions are asked to the band directly from the audience. When asked about the cover of their Album which includes a picture of a torched Ford Transit van located in Reading. The boys laughed the question off admitting that they had an idea to set their tour bus ‘Big Suze’ alight… and so they did. When asked why their answer was simple, “Reading’s a commuter town. It’s the kind of place that people want to get away from. We want to celebrate it… put Reading on the map”. 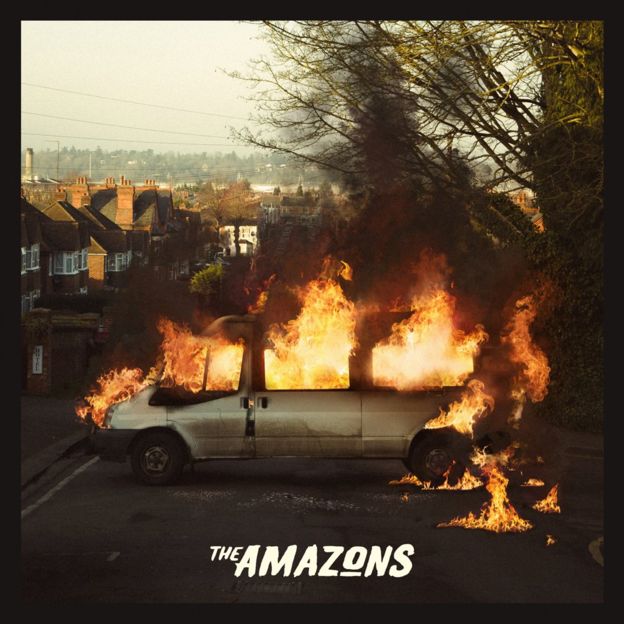 The band seems ridiculously enthusiastic and you can almost smell the passion for future success in rock and roll. It would seem that British guitar based music is in trouble at the moment, whether it’s the eternal feud of the Gallagher brothers and Blur or Kasabian saying that they’re the only ones who can “save guitar music from the abyss”. Matt and his band of progressive music members seem to be rocketing through this rough patch gaining fans from bands like Cat fish and the Bottlemen.

The music was good. Really good! This band has riffs in buckets and their performance of ‘Ultraviolet’ seemed to bring energy to the crowd. At the time, The Amazons were looking forward to festival performances at the likes of Glastonbury, Isle of Weight and Reading and Leeds. These boys are going head first with the big dogs. Watch this space, they’re here to make some noise!