Tranquillity Base Hotel and Casino hmmm… Turner and his mates have taken a jump with this one. A jump off this world, they want to take listeners to the moon in this sort of made-up science-fiction reality and they want YOU to stay at their luxury resort.

The band are boldly going back to basics with this one, in the sense of really stripping all that rock ‘n’ roll down and are looking inwards for inspiration. This really is the biggest step between albums that Arctic Monkey fans have ever seen. After reviewing interviews Turner also mentioned that he didn’t realise when scribbling, how different it would actually turn out to be.  Fans especially newer fans, that came after Turners gelled quiff and leather rocker look, are used to those spiky guitar riffs and echoing drums and I’m sorry to disappoint you but if that’s your thing then TBH&C is not for you. This album is for deep listeners and has a theme through-out, to be played in a quiet room.

The new tracks set the scene for a futuristic lounge with a vintage keyboard, and could be influenced from the likes of the Beach Boys’ Pet Sounds, David Bowie and The Beatles at times. The whole album is pretty unsettling and almost changes your mood and gets you questioning the universe in which we’re a part of… Deep shit.

The Sheffield rockers seem to be pretty future thinking but is Turner attempting to make a statement about the current method in which the majority of the world access music, by not releasing any lead-up singles? “The aim seems clear, the Monkeys want to save the album, forcing fans to listen to their record as an entire statement rather than a collection of tracks” (NME). Another un-trend-like action that the quartet have taken is that with each purchase, fans also get a book containing the futurist-frontman’s lyrics. Is this so we can rip them out and stick them in our wallets for a rainy day?

So, if the Monkeys aren’t launching songs with electrifying guitars and hip-hop vibes then what are they doing? The R U MINE singer seems to trickle away at his piano and the rest of the band are almost forced into the shadows, with a few background fills and unexpected experimentation with synths. I mean what will come next an Alex solo adventure? Six albums in and the Star Treatment band are still refusing to be labelled by a particular genre. 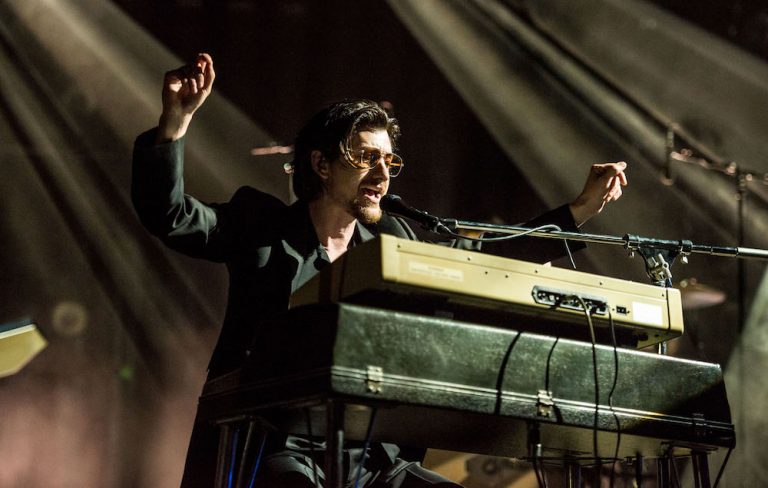 All in all, this album has shaken up the world of traditional R’n’R with an addition of blues and jazz twisted with sci-fi. The normal lyrics of sex, drugs and alcohol have been traded for the likes of dancing in my underpants /I’m gonna run for government /I’m gonna form a covers band an’ all”

These four musicians have fully submerged themselves into this venture, into this defined hotel and casino, and are inviting you to check in and do the same.

So ladies and gents, watch out for those dusty craters we’re not in Sheffield anymore.

Listen to Tranquility Base Hotel & Casino